Social aspects: How colluvio came to be, where it leads to.

Parallel to and in accordance with its striving for high musical standards, colluvio is a project for understanding among nations and for encouraging a sense of Being Together in Europe.

The Austrian project colluvio sees itself as being a musical ambassador, that tries to further the communal values of Europe in an exemplary fashion. On the concert platform it not only demonstrates how communication between nations functions in an uncomplicated fashion, but at the same time can be inspiring, motivating and productive. 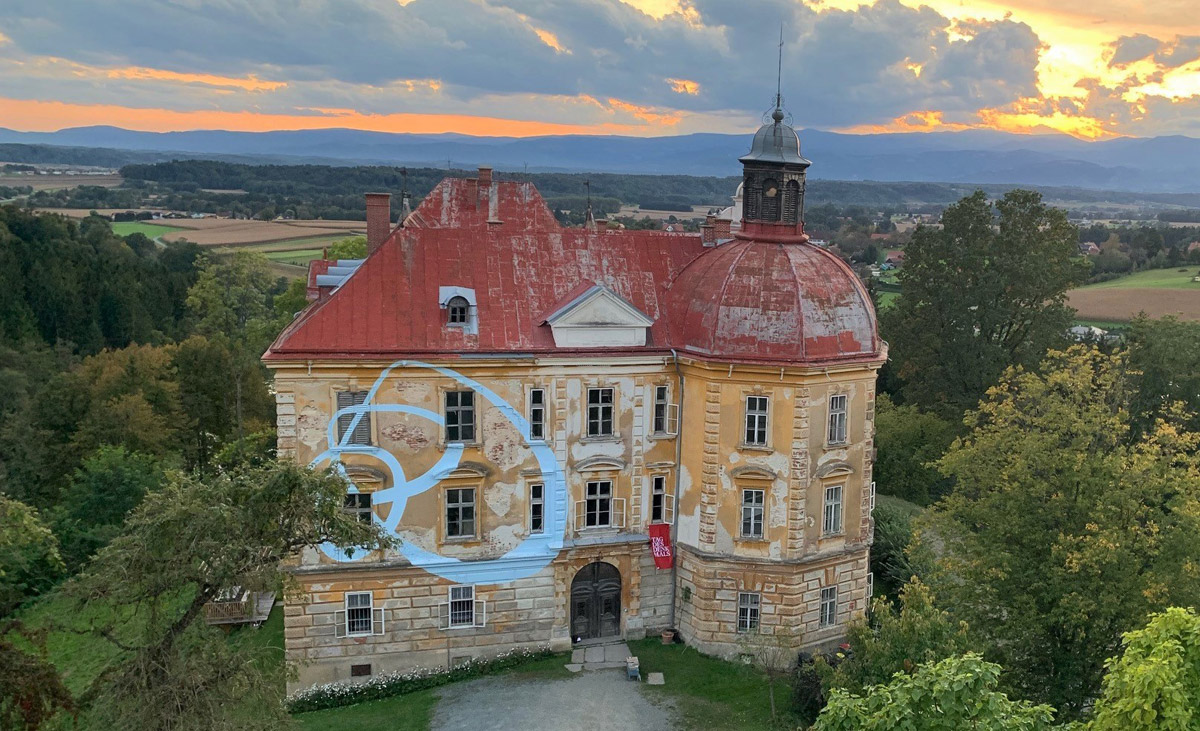 The story of its founding

In the year of colluvio’s founding 2001 Meinhard Holler – who had grown up at Gut Hornegg, Austria – invited young musicians for the first time to take part in a chamber music course that did not initially bear the name “colluvio”. It was, however, as it is today, a mixture of musicians from various countries. Young people from Austria, Germany and Serbia got together to play chamber music. 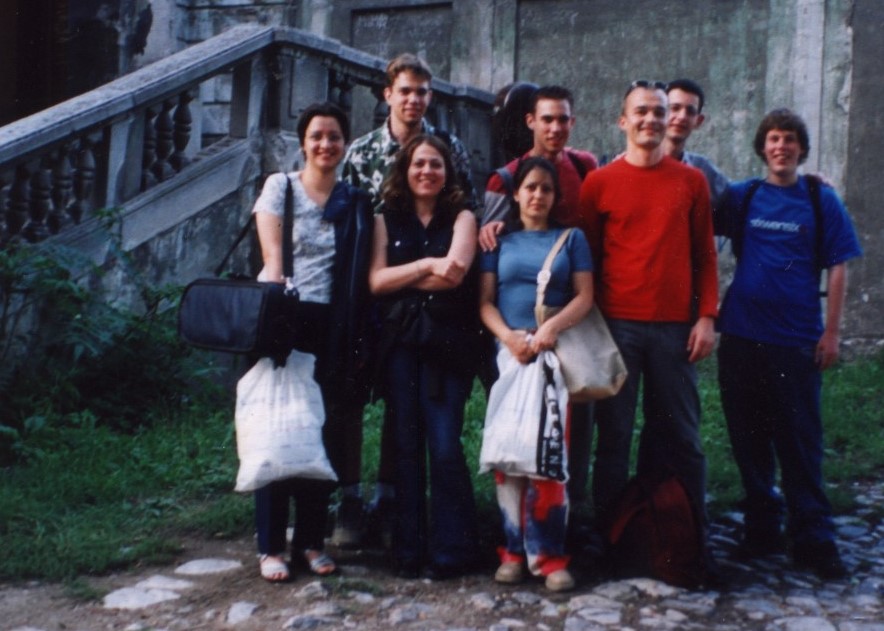 2002. In front of the concert hall. Sremska Mitrovica, Serbia

“The wars in Yugoslavia had only just come to an end, the diplomatic relations between the countries were difficult if not frosty”.

That first year in Austria only two concerts took place and so the players had the feeling that something was missing.

It was then that the rather exotic idea germinated that the following year concerts should also be arranged in Germany and Serbia. The Serbian members wanted to invite their German-speaking colleagues to Belgrade and give concerts in Serbia. The wars in Yugoslavia had only just come to an end, the diplomatic relations between the countries were difficult if not frosty.

It was just this situation that spurred the young musicians on to organise the co-operation of concerts reaching over the borders of their homelands. In the following year 2002 the plan came to fruition, and so it was that the first colluvio Tour with now seven concerts took place in Austria, Germany and Serbia.

En route the tour led them through the neighbouring countries of Croatia, Bosnia-Herzegovina and Slovenia, which one also wanted to include in plans for the future. Soon concerts were organised in the whole of former Yugoslavia with the best new-generation musicians from all these states taking part. Thus colluvio grew into a music project uniting peoples living in a crisis region.

The ORF Documentary Film about colluvio

In 2010 this development led to a special project in Kosovo. At the instigation of the film director Walter Wehmeyer, he and his camera team accompanied and filmed colluvio over a period of nearly one month:

Thus it was possible to engage the best students from the Music Academies in Priština (Albanian part) and Kosovska Mitrovica (Serbian part). Well-known concert halls in the region were booked.

In countless personal conversations the students had to be persuaded to take part in the project, aiming at bringing politically opposed peoples together. Many were anxious about the consequences, if their participation were to be discovered, if it would be spread in the media or via private relationships.

It was fear of public criticism and even more, fear of their own ethnic race. For this reason, right at the last moment, a Serbian girl from Kosovska Mitrovica stepped down from taking part. The reason for this was a fatal attack on the bridge over the river Ibar, that divides the Albanian and the Serbian districts of the town. A Serbian girl, only studying in Kosovska Mitrovica, but otherwise at home in Serbia, took her place 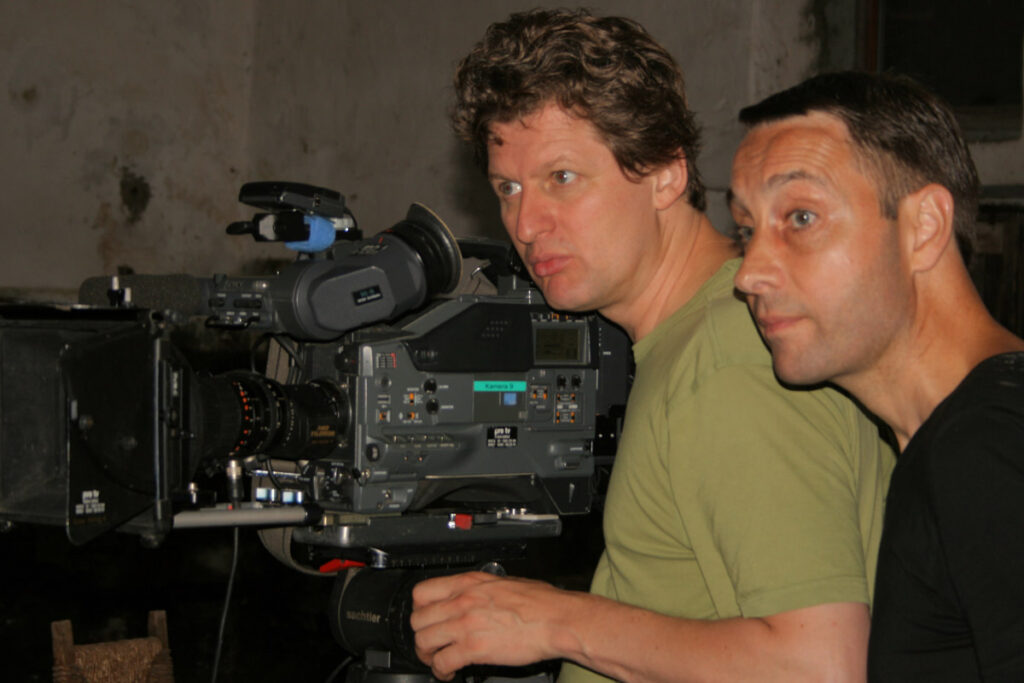 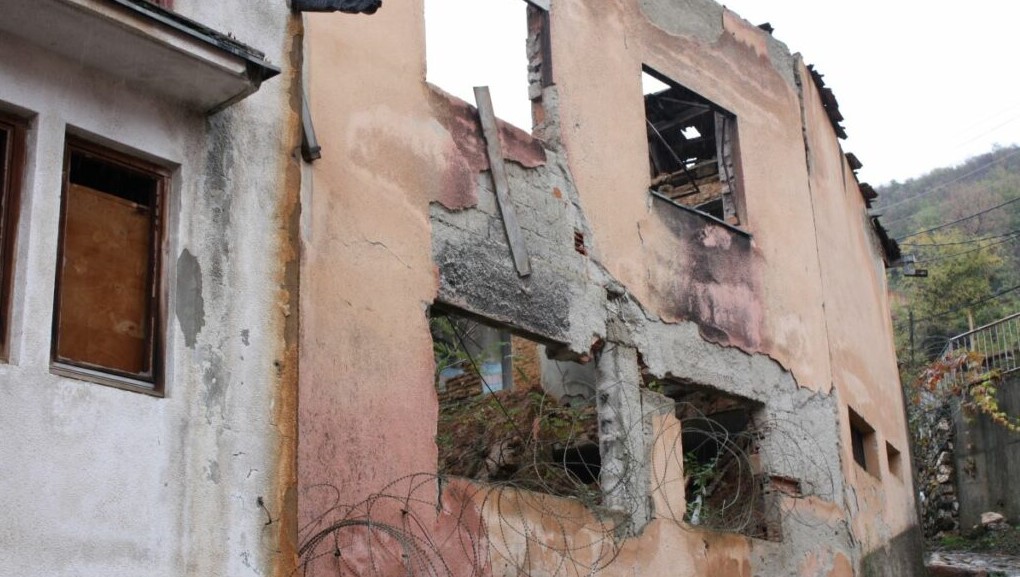 Kosovo: Legacy of the Prizren Pogrom 2004

Music after the war – Kosovo between trauma and new beginnings

An ORF Documentary Film about colluvio

“From this material ensued the ORF Documentary Film “Music after the War, Kosovo between Trauma and new beginnings”, which turned out to be of artistic value and was broadcast by nearly all German-speaking TV stations, ORF, BR, ARD, WDR, NDR, SWF, 3 Sat, Arte, Deutsche Welle TV, Planet TV Germany….

For the first time, the Austrian cellist Meinhard Holler has succeeded in bringing together music students from peoples engaged for generations in conflict with one another (Serbs and Albanians)….”, so begins the synopsis of the film. 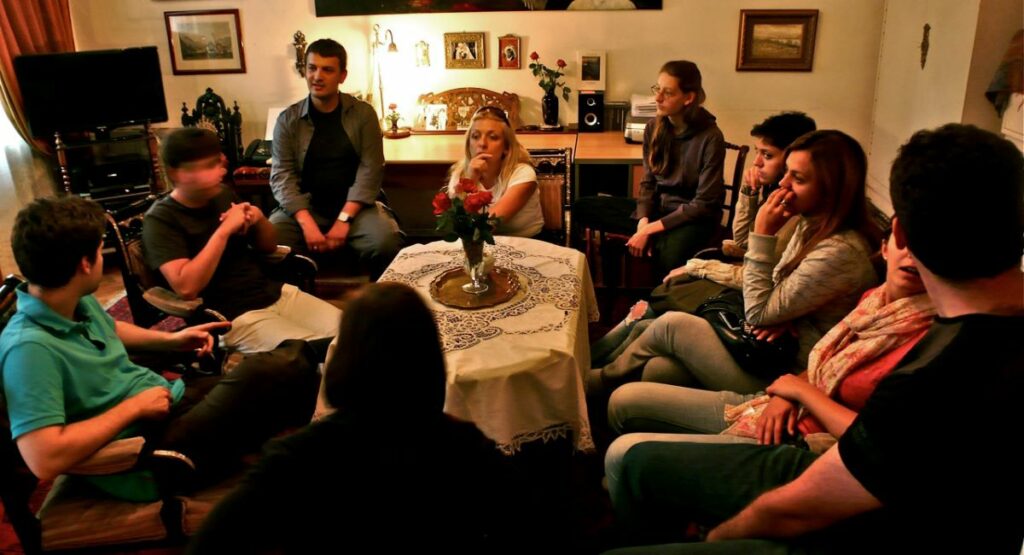 Concert Tour 2010, Crisis meeting in Priština: “What if we don’t cross the bridge in Kosovska Mitrovica?” 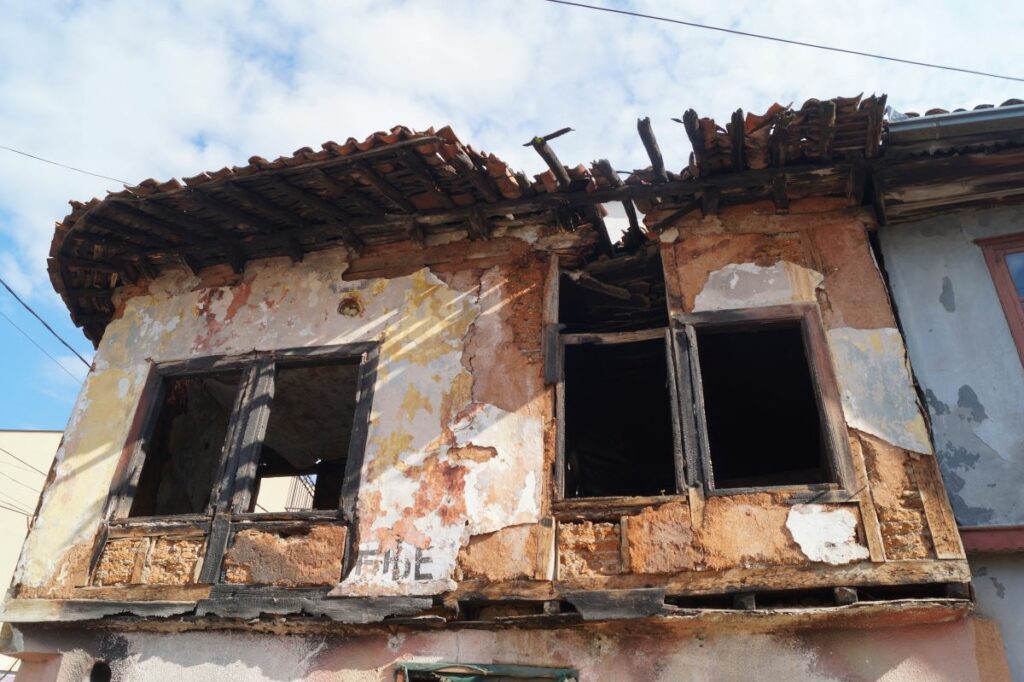 Kosovo: Legacy of the Prizren Pogrom 2004

„Playing with the Enemy“

The colluvio film was seen on television by two scientists working at the University of Leiden in the Netherlands, which subsequently led to the next project:

Encounter Ukraine – Russia
In 2018 and 2019 colluvio layed its accent on the bringing together of music students from the Ukraine and Russia, again countries in conflict. Students from these two countries were given preference.

Colluvio 2019 was accompanied by the two scientists and musicians, Dr. Gisela Hirschmann and Dr. Niels van Doesum from the University of Leiden, Netherlands in the context of their research project concerning Music and Social Interaction.

Their research study “Playing with the Enemy” concerns the colluvio Chamber Music Academy along with Daniel Barenboim’s West-Eastern Divan Orchestra. Both institutions are compared with one another and the behaviour of the participants is analysed. 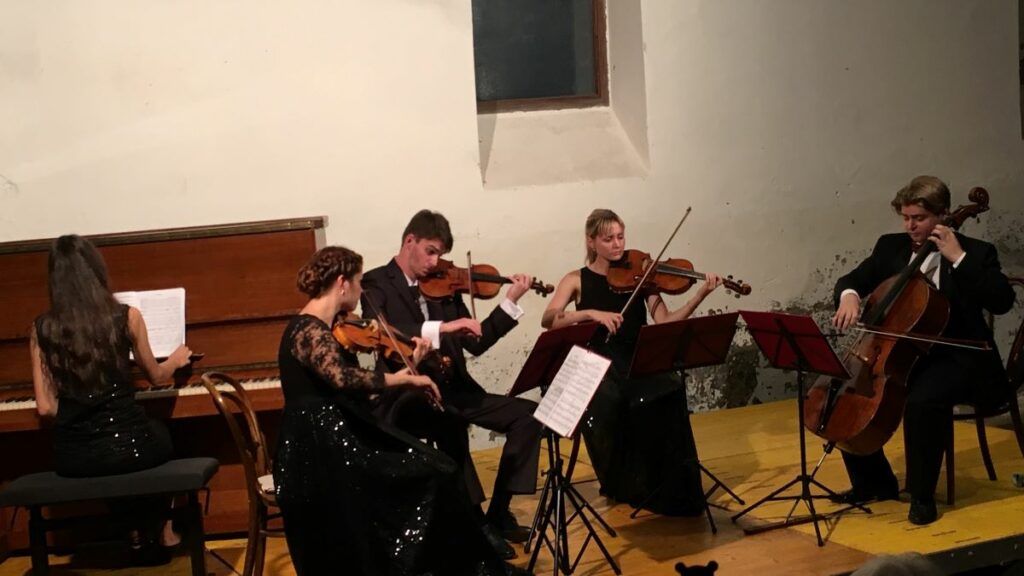 “Playing with the Enemy. Ukrainians and Russians make music together. colluvio 2018

These days colluvio considers itself to be a peace initiative covering the whole of Europe in which the best new-generation musicians from all over the continent are invited to take part. As in its beginnings the tour initially leads from mid Europe to countries in the south and east.

Our accent still lies in the inclusion of regions that are noted for conflict. In further project planning  we want to include countries that are not yet members of the European Union. Considering the possible future inclusion of some eastern and south-eastern parts of Europe to the European Union, colluvio entertains the particular hope that it can bring about cultural exchange between mid-European countries and states in former Yugoslavia as well as parts of the former Soviet Union.

It is our aim to stabilise colluvio’s finances so that, in the near future, alternative concert routes might be possible. For example: 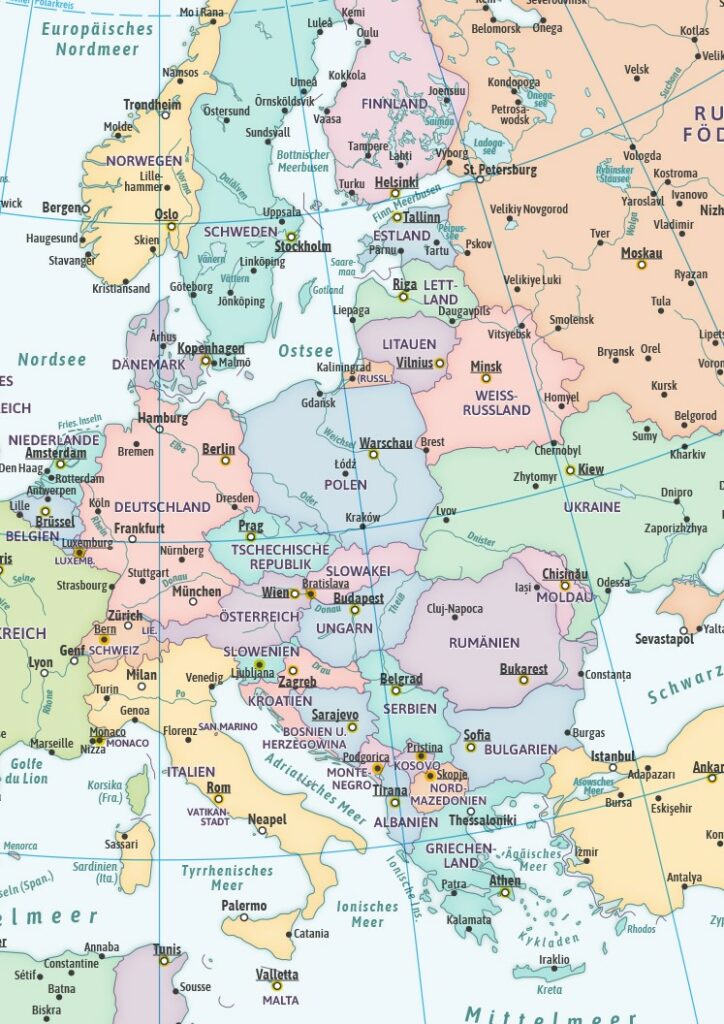 Novi Sad in Serbia was chosen for the European Capital of Culture 2022.
The town sprawls on both sides of the mighty Danube, which in some places has already reached a width of more than one kilometre. Bridges in the region have always played a large rôle.

During the bombardment of Serbia in 1999 Nato forces destroyed all of Novi Sad’s bridges, not all of which have yet been rebuilt. In the thematic “Novi Sad 2022” and also in reality, the four bridges over the Danube have been named Love – Freedom – Rainbow – Hope.

“The Danubian Sea” is one of the themes.
Colluvio has caught on to this idea and decided to direct its tour 2022 through countries bordering the 2,840-kilometre and connected towns and cities situated on its banks and give concerts there. 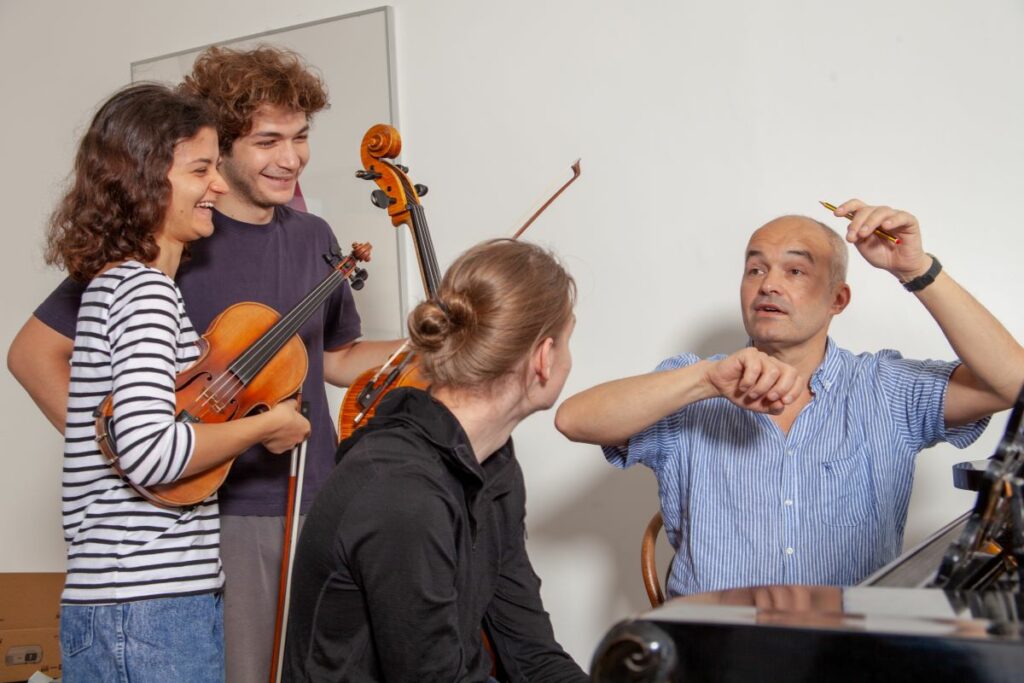 Broad-based funding is therefore necessary for colluvio’s future. Only in this way can our new projects be realised. 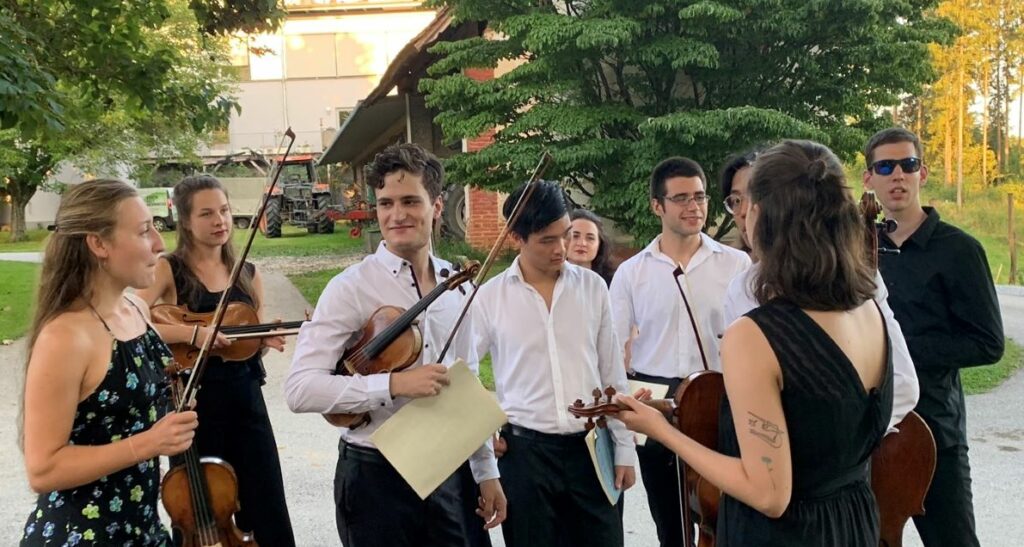