…Everything indeed went well after that first train I missed in Vienna. I’m really looking forward to seeing the videos now, not only Debussy but Arenski and Dvorak too! I don’t know yet what the upcoming summer is going to be like, but I’d really, really love to come back.

I wanted to write you an email to thank you once again and your whole family for welcoming us in that beautiful place and making this summer so unique. To me, it really was an eye-opening experience on chamber music. Having the opportunity to play with musicians with completely different musical backgrounds and cultures was super interesting and rewarding.  Courses like this one are extremely rare: it was all about the music and having good times, while still being very serious and focused on working together, not about who’s playing scales the fastest.

After colluvio I took a few days break from the cello, and coming back to it I was amazed by the sound progress I made and I think it is greatly due to playing that much chamber music. 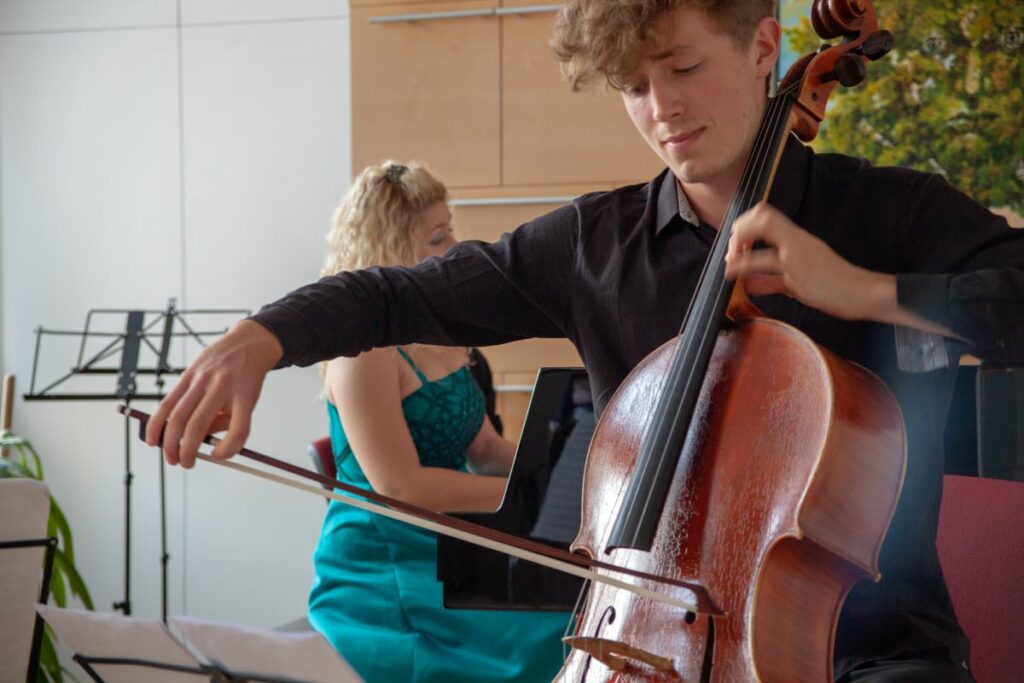 Just wanted to say thank you ever so much for giving me the chance to come to Colluvio, I couldn’t have asked for a better time with so much to learn. From the bottom of my heart, it was really such an amazing experience to learn so much from you guys and also my colleagues. I really hope that I have the chance to come back to such an amazing opportunity in the future years. 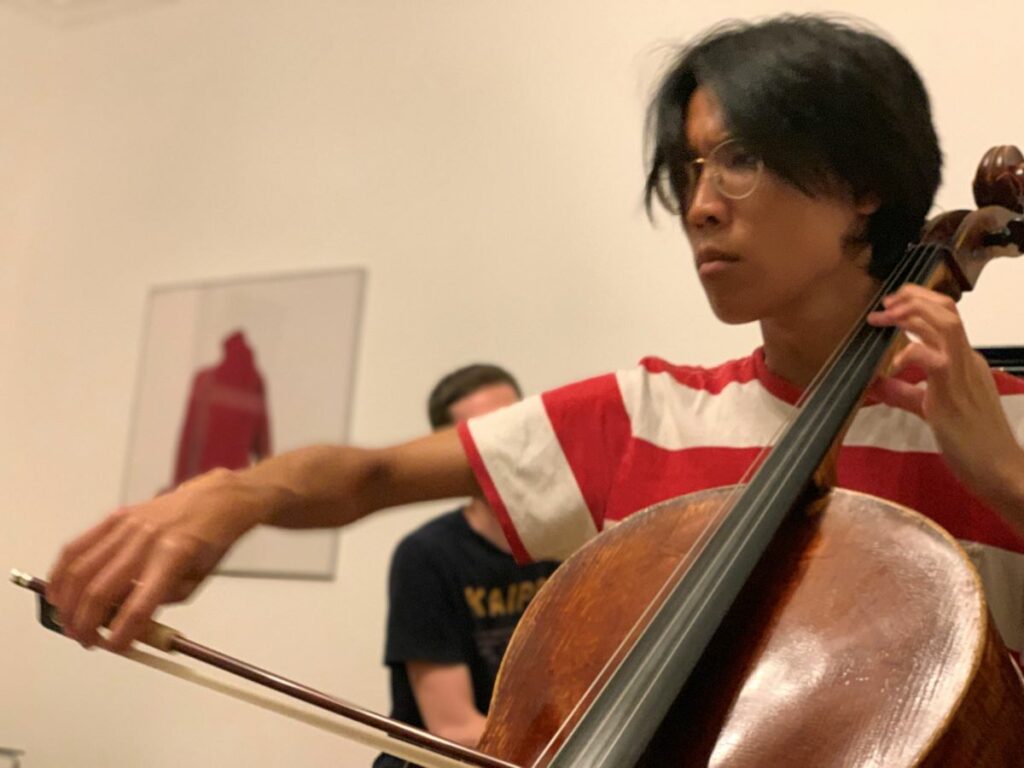 Having taken part in master classes three times (2016,2017 and 2019), I can say that every year left completely different, but no doubt vivid impressions.
Colluvio can teach you not only to play music in ensemble, but also to acquire a skill that will help you in your future professional life. One of them is the ability to create a common ensemble in a very short period of time, to come to a common understanding of the spirit of music and many other usefull things.
Based on my own experience, I can say that the level of participants is quite high in the technical sense of playing instruments, the emotional perception of music, the level of intelligence, etc. It is this aspect that will make your stay at Colluvio interesting and give you an unforgettable experience for a lifetime.
Lessons with professors may surprise you with something new, but they may also confirm all your knowledge about performing the chamber music. One way or another, but every teacher will inspire you to work productively on a piece of music. Each teacher will make a valuable contribution to the common cause – the creation of a concept convincing for both the performer and the listener.
One of the individual features of Colluvio are home concerts, which take place every second day of the master classes. Practice shows that frequent playing your compositions for teachers, other participants, casual guests and the Holler family gives high and qualitative results: 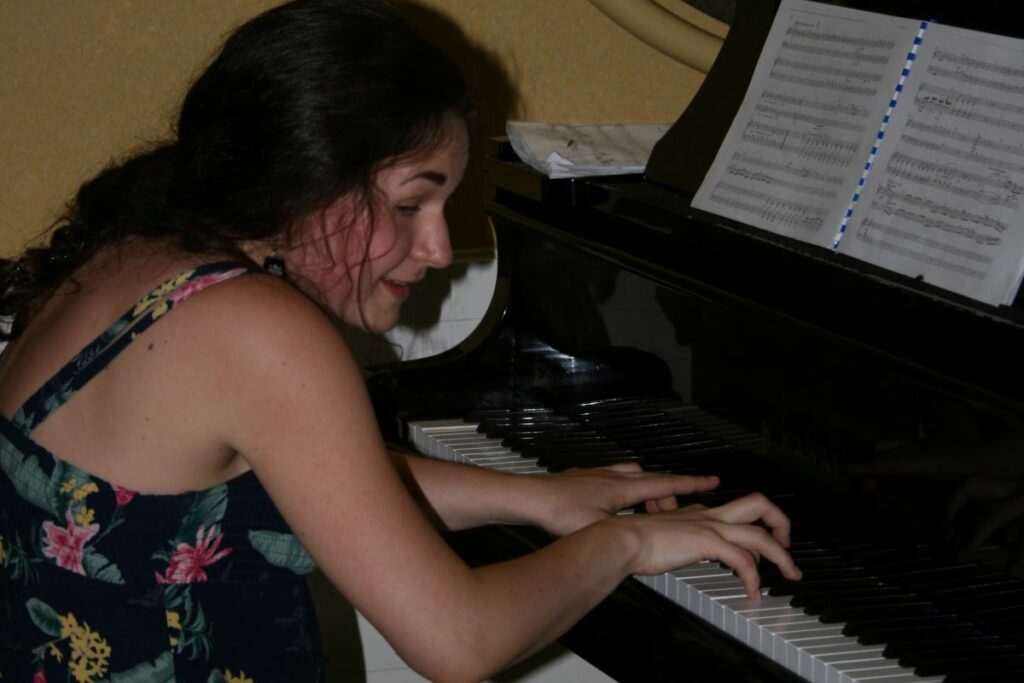 firstly, it helps to cope with the stage excitement, which all musicians certainly experience to one degree or another; secondly, facilitates the holistic perception and recreation of the piece; thirdly, it helps to better feel your ensemble partners.  Also, „home concerts“, take place in a new place every time. Such an element of unpredictability also brings a twist and encourages musicians to rediscover sound balance, adapt to acoustics, etc.

Participation in these master classes is also able to give you new friends with whom you will want to communicate and play even after the completion of the project. Thanks to the fact that each participant represents a new country, Colluvio becomes an international project. Within a month, you can get acquainted with the culture of different countries, a bit learn unfamiliar language, learn about the features of studying in different music academies, discover other famous teachers, etc.

The most difficult but enjoyable part of Colluvio will be the concert tour. On the one hand, daily relocations and concerts in different cities and countries will completely exhaust you. On the other hand, that sincere gratitude and genuine interest of the audience that you can feel during each concert will give you new strength for the next concerts. Traveling from place to place, daily plunging into the culture of different countries, all participants of Colluvio share a common feature – the love of music and the desire to share it with the audience.

Of course, each participant will find exactly what he is looking for at the master classes. This may be the opportunity to perform on a large stage, mastering a new musical work, cool communication with interesting guys, moral and physical relaxation and, of course, gaining professional knowledge and skills. For every musician, there is one trait for which he could fall in love with Colluvio and all the people who help this project take place every summer for almost twenty years.

For me personally, Colluvio is a special project, not like other master classes. This is not just a competition between participants who will be the quickliest one to learn the work in 10 days or who can better play their trio / quintet at a home concert. When you arrive at Colluvio, you will feel that it is a large musical family in which you could feel joy and pride from the fact that for some period you become а part of it.
Therefore, I advise every musician who is interested in professionally developing their skills and expanding the boundaries of their skill to come to Colluvio and feel everything what I felt. 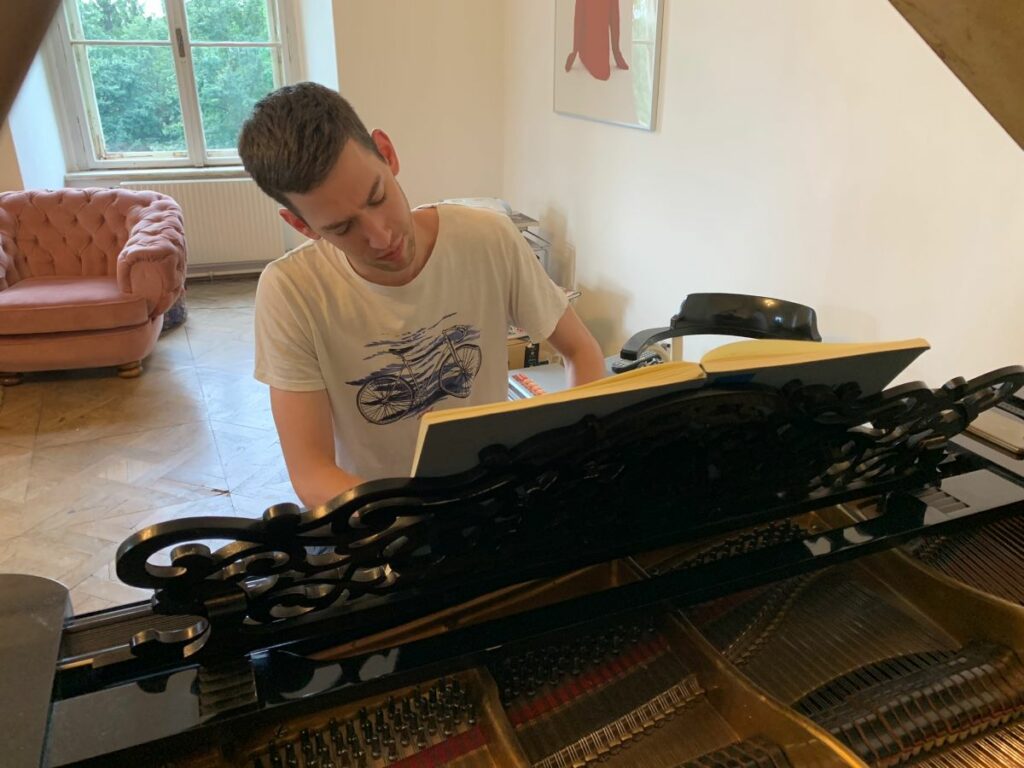 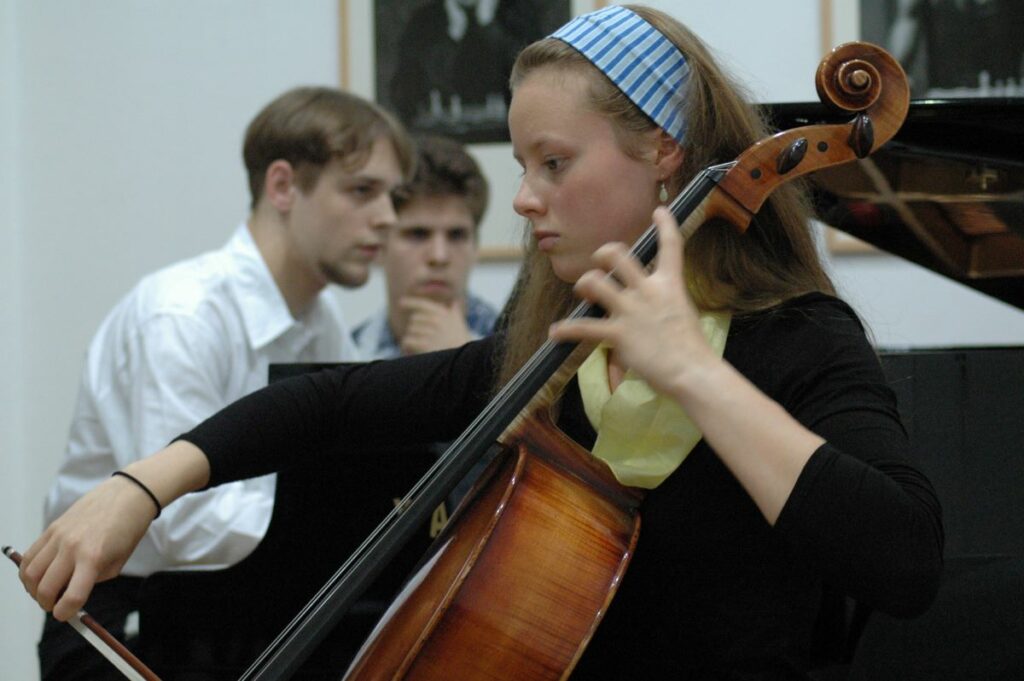 Thank you so much for this inspiring, wonderful and magical experience I had last summer! Colluvio exceeded my expectations by a long way.

The level of the musicians was extremely high – each player had their own very distinct musical personality which meant that by working with each other and listening to each other perform, we were constantly learning.

The added experience of having the opportunity/luxury to work so in-depth on one piece for such an intense period of time made it even more special as all the players got to know each other really well and to develop very close friendships. 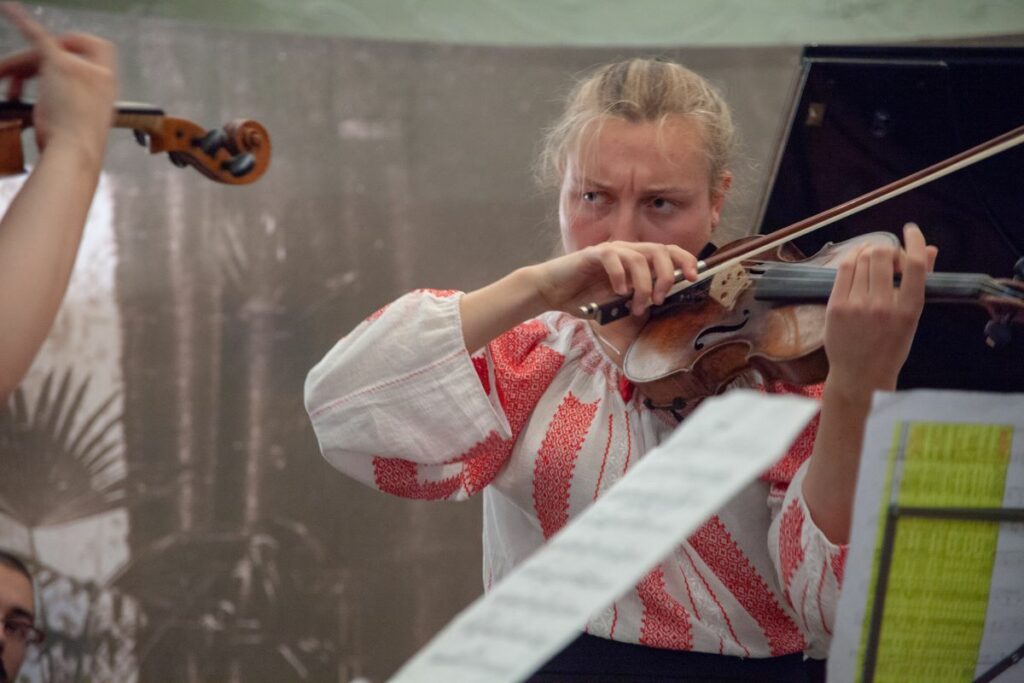 The fact that on the tour we performed our piece so many times in very different circumstances and in various acoustics with different audiences was something which I hadn’t experienced before and which taught me a lot. Every concert was recorded, which was very interesting and helpful as we were able to listen to the recordings on the long bus journeys and analyse our last performance in order to improve for the next one.

The first half of the course, we were guided by wonderful musicians (cello, violin and piano professors) who came from different countries and musical backgrounds. Their teaching and advice gave us various angles and ways to approach the repertoire which we were working on. Claus Christian Schuster was an amazing man to work with. He really is a genius – an amazing musical mind with a huge heart. His insights into Weinberg’s Quintet were really fascinating and eye-opening and yet he was so humble when he sat with us in the evenings and told us his life-stories and experiences.

Gut Hornegg is a beautiful place which really made me feel very inspired and at home. I really couldn’t believe my eyes that first morning when I looked out of my window and saw the sun shining on the castle. Being able to run through the hills and swim in the lake was a wonderful way to take a break from all the rehearsing, practising and performing. I felt so welcome in Gut Hornegg and your mother, who was always so friendly and lovely to speak to, made amazing food too, even for the vegetarians!

As for the tour, this was an extraordinary experience. The crazy bus journeys, listening to balkan music on repeat (‚Ti Si Moj Greh‘ by Lepa Brena was played hundreds of times…), bringing our chamber music to so many people in different countries… It was really was something very special and unforgettable.

Aside from music, the things which bring me the most joy in life are travelling, discovering new languages and foods, seeing new cities, meeting new friends from around the world. Colluvio let me experience all these things, for which I am extremely grateful. On the last day, when we had to say our goodbyes, there were definitely some tears.

Let’s keep in contact! And let me repeat – I definitely want to come back to Colluvio again next summer! 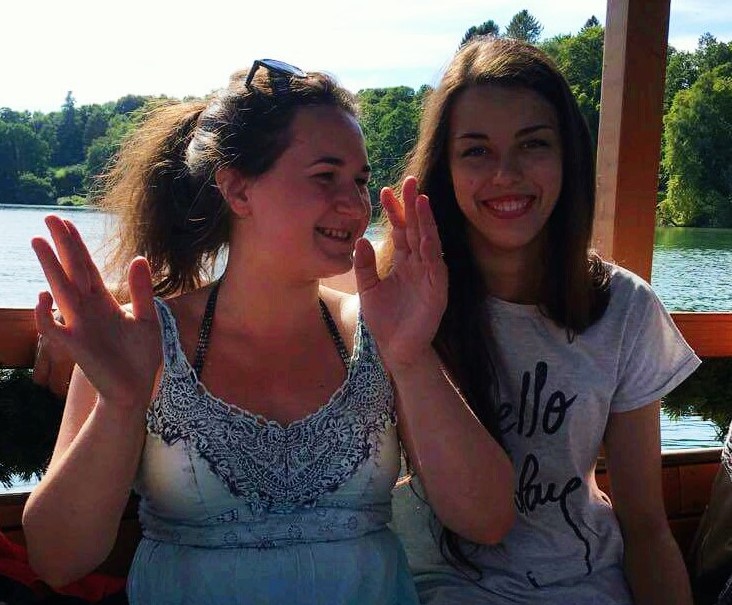 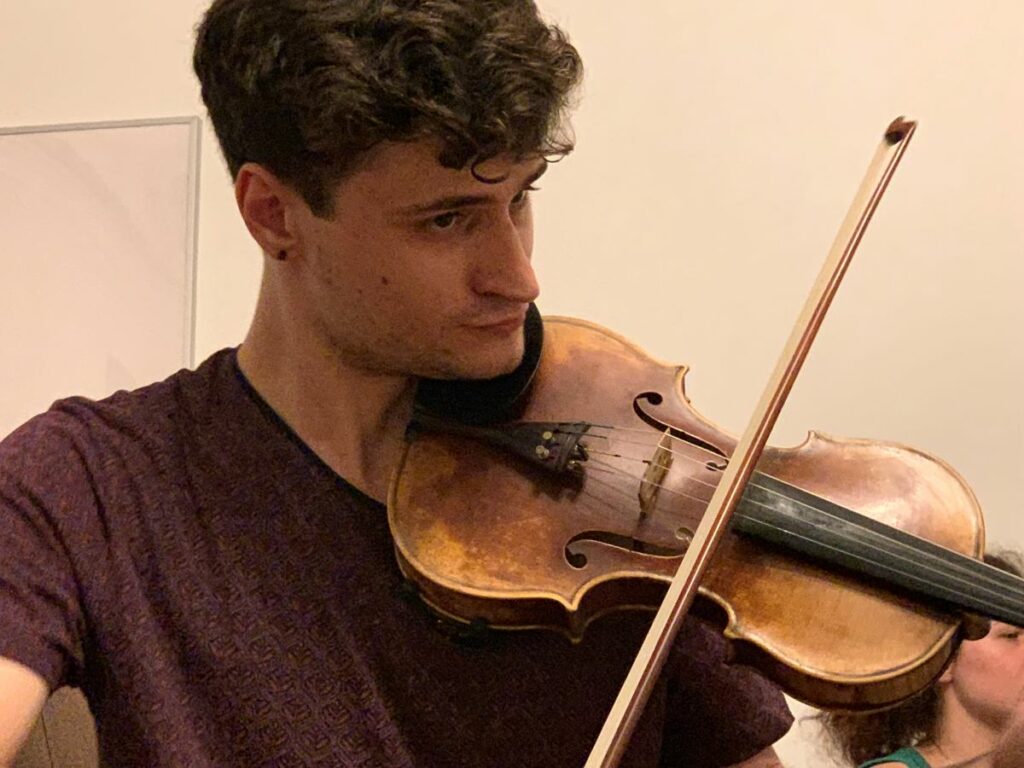 A sad na engleskom, pošto mi je lakše 🙂
I apologise for not writing to you earlier. I’m really bad in keeping contacts and internet mailing. But that doesn’t mean that I didn’t want to.
Actually, I have to say thank you very sincerely for giving me the most interesting month of my life so far. I have enjoyed every moment of that pleasant stay in Hornegg, and I miss it
very much. Practising together, beers, and eating the lunch – I’ve never eaten better thanks to your mother’s cooking skill.
It’s great that at least some people are meeting you soon, and perhaps Sabeth. I just talked to Marija half an hour ago on Facebook, and we talked about possibilities to meet, so that will probably happen soon. I also think you’re coming here sometime next year. World is not too big after all.
I’m lerning German by the way, hopefully soon I can be able to communicate, and not miss any jokes. Aber jetzt mein Deutsch ist noch nicht gut genug.
Say hello to your family and to everybody else I know. 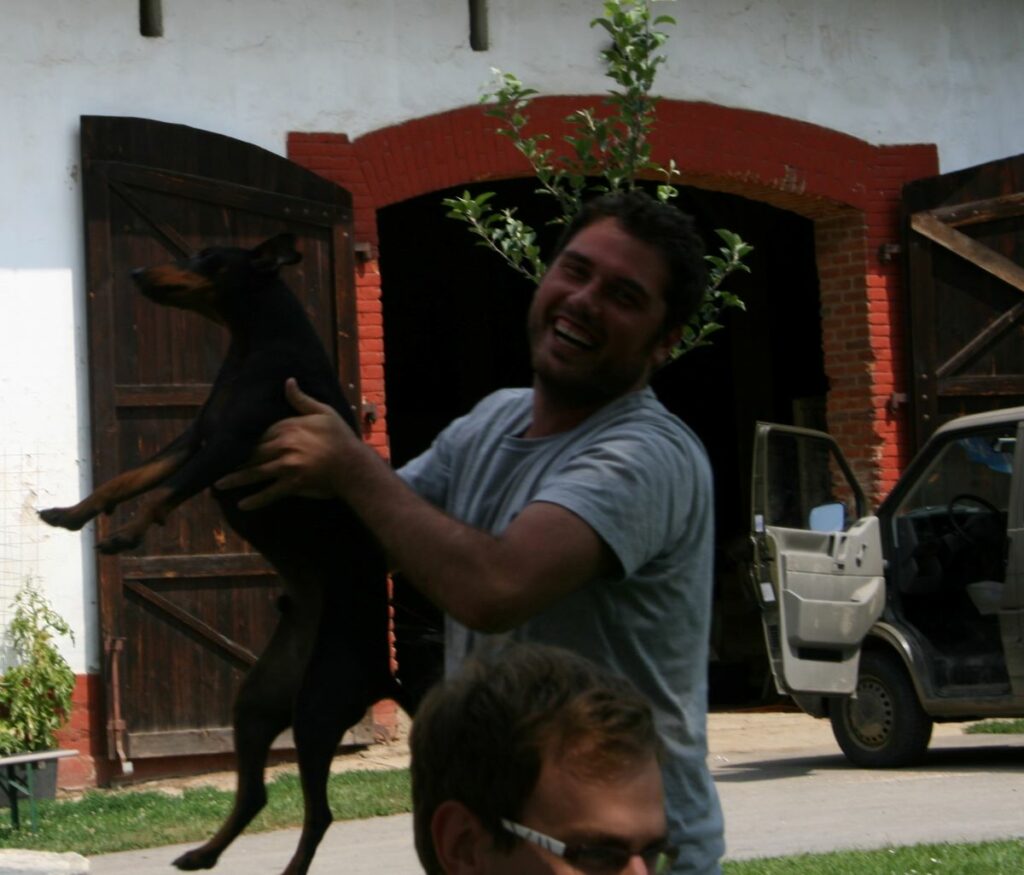 As I promised here is my letter. What I really have to tell You, is my story before Colluvio.

I’ve finished the University in 2006.I was workless until now… In this summer I was really fed up, with travelling, and have just one or two weeks long works, in other cities, and I haven’t got a permanent, fix work, with salary.
In Hungary it’s so difficult, but we had talked about it. I tried a lot of things, I went on some auditions, and I wrote a lot of letters to music schools, but I didn’t have success. So I was really sorry, and I decided, if I won’t have work until June, I will go to the army:)It’s seems so stupid now, but I was really sad, and felt like giving up to play the cello.

And then came Colluvio, like a miracle. It was one of my most beautiful experiences, when You called me, and invited me, to take part in Colluvio. And when we were there, I found my place. I could see there, that I’m not as bad cellist as I thought it here at home. I could see, that to give up to play the cello, it would be terrible.

And when we came home from there, a lot of things changed in my mind. I find now pleasures, and new inspirations in playing the cello. First I thought that, I will go to Germany to study more, but then I found this audition on the internet. I felt,:“Why not?“ – and got it. It’s so fantastic, what I feel now in my heart.

With a lot of love:Zsófi